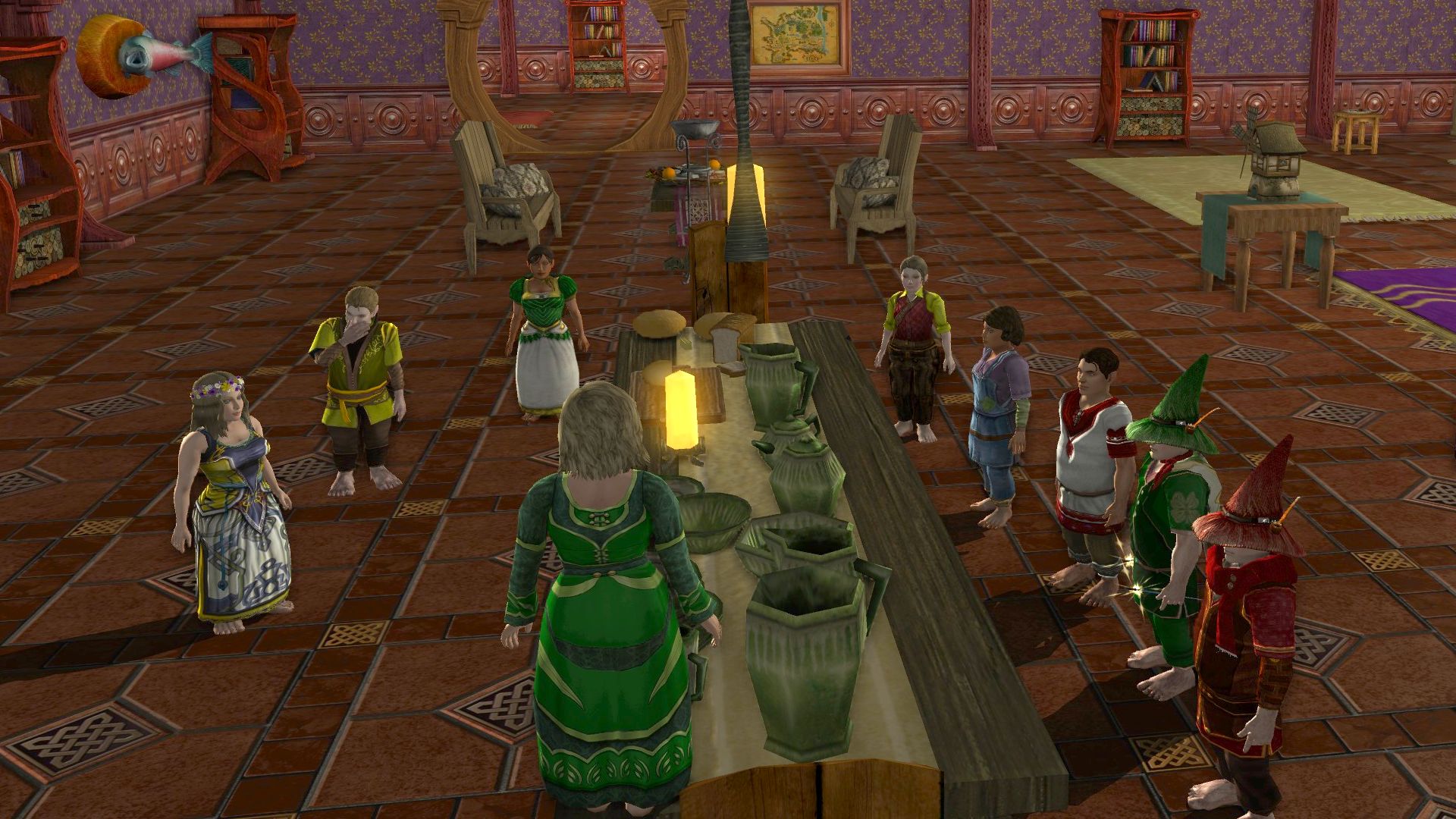 We brewed ales. They need names!

Brewing the ales: A summary

On Wednesday 28th April, a group of hobbits gathered at Songburrow Hall to brew some special ale for the 13th Green Dragon Friday party, taking place later in May. Miss Pycella greeted everyone welcome outside in the garden, and when everyone had filled up their bellies by the garden table, it was time to move inside for the brewing.

The hobbits gathered around a long table loaded with strange pots and containers, wondering what ingredients would be used for the special ale. Pycella announced that they would actually brew two special ales – one berry ale and one “well-hopped” ale. But first, they would have to go downstairs for something important… the dish-washing! Hobbits gathered around a pool where they needed to scrub some kitchen utensils “squeaky clean”. Potty managed to drop his dishes down to the bottom of the pool and spent most of the time fishing them out. Others did their best, hoping that the rest of the brewing process would be more interesting. When the equipment was all cleaned up, Pycella beckoned everyone back upstairs. It was time to start with the brewing itself! Everyone carried the utensils to the long table, Potty leaving a trail of puddles behind him.

Next, the hobbits took a look at the ingredients: water, malt, hops, and yeast. Pycella pointed at a bowl with grains inside. That was the malt that would be poured into the warm water in the next phase, the mashing. Before that though, the grains had to be crushed. Everyone took some grains and started to crush them using various methods. Pycella picked a strong club and smashed the grains with it, Grufforic hit the grains with his forehead, someone jumped on the grains… You could hear the windows rattle. After some effective crushing, the malt was ready for the mashing. The malt was put into the heated water. It would form the “body” of the ale and provide the sugars that the yeast loves so much. After the mashing, Pycella’s assistant, Hemmeric, filtered the grains carefully from the sweet liquid called “wort”. Everyone sniffed the lovely bread-like scent and marvelled at the golden colour.

The next phase was boiling. The wort was poured into a cauldron with hot water. Pycella explained that the other main ale ingredient, hops, would be added during this phase. Also other flavours could be added. The hops were dropped into the wort, and a strong scent of ale filled the room. Potty had brought some berries and honey, and these were added too. While the berry ale was bubbling in the cauldron, it was time to get the other ale boiling too. With some help from Grufforic, Pycella managed to move the heavy container with wort inside to the other fireplace on the other side of the room. This ale would be “well-hopped”, so more hops was added. Potty offered some nuts to add to the mix and to make the ale slightly naughtier (for some reason, the Mayor regards “nuts” as a very, very naughty thing).

After the boiling, the ale had to be cooled down before the yeast could be added. “The yeast is a living being, and it doesn’t like hot baths,” Pycella explained. Bringing a whole cauldron of ale to cool down would take some time though, so they needed to fasten things up a bit. Pycella suggested that someone should hold the cauldron steady while others threw snowballs at it (for some unexplained reason, folks always had a few snowballs handy). Potty volunteered (or was volunteered?) to hold the cauldron while others got their snowballs ready. The snowballs did their job, and some might have hit Potty’s hat too. At last, the ale was cooled down to room temperature, and the yeast could be added. Later on, the ale would be moved into a keg for fermenting and conditioning. With that, the brewing session was finished!

The two ales would only be ready for drinking in a month (at the GDF anniversary), but luckily, Pycella had brought some samples of the yule ales she had made earlier: the Yule Biscuit Brew, Garden Dwarves’ Yule Surprise, and Bounder’s Porter. Potty noted that only one thing was missing now: the names of the two anniversary ales. With their imagination powered by the yule ales, the hobbits started to offer suggestions for the ale names. Pycella noted down them down. Now she only needed to choose one for each ale… Oh dear. Such a hard decision to make! Maybe yer can help her out here?

Here are the results after the two anniversary ale votes.

The first vote was for the “well-hopped” ale – a golden, refreshing ale rich in hops with a hint of nuts. It gives you the energy to hop all night long and spill your drink.
The results after the vote was as follows. 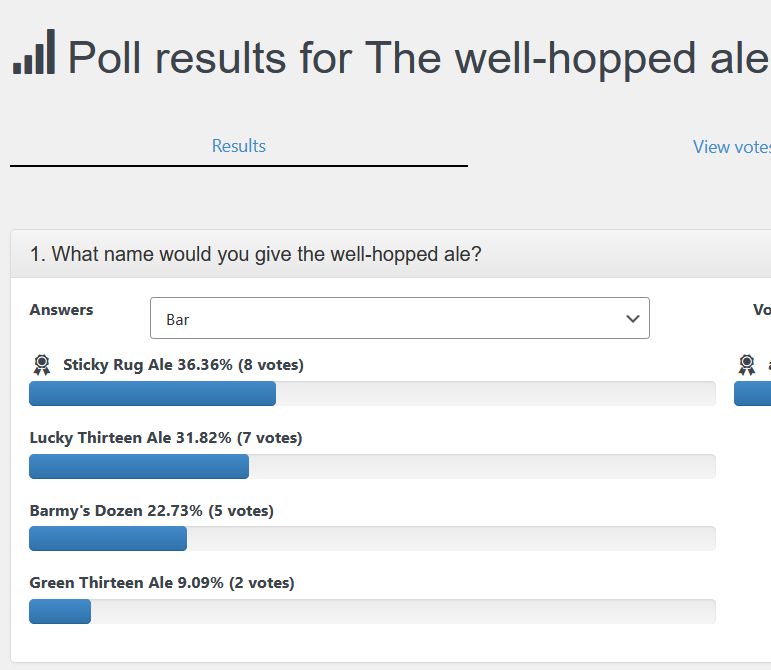 So, the Sticky Rug ale just squeezed into the top slot!

The second vote is for ale flavoured with juicy berries. It is sweet but strong, thanks to the added honey. It might make you feel like a wild badger.
The results after the vote was as follows. 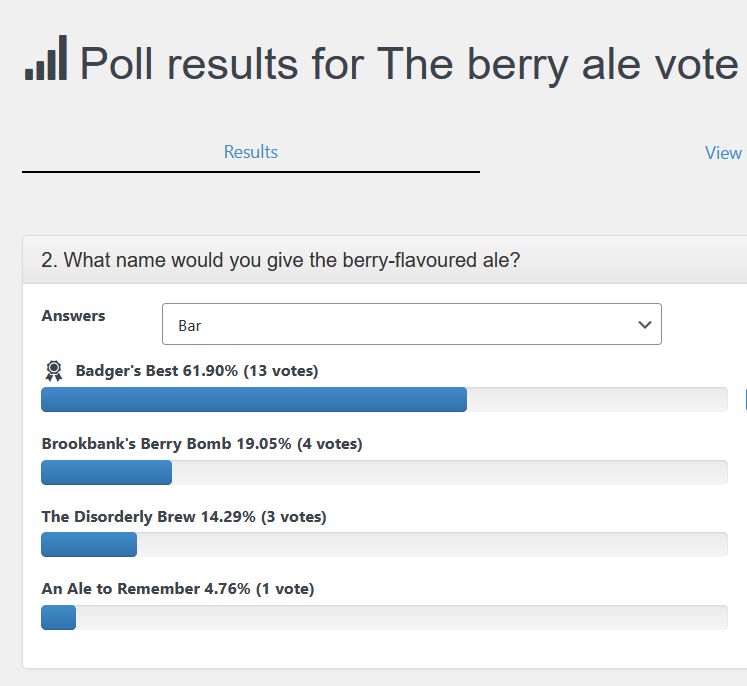