Hobbits of the Grand Order – a special LOTRO community 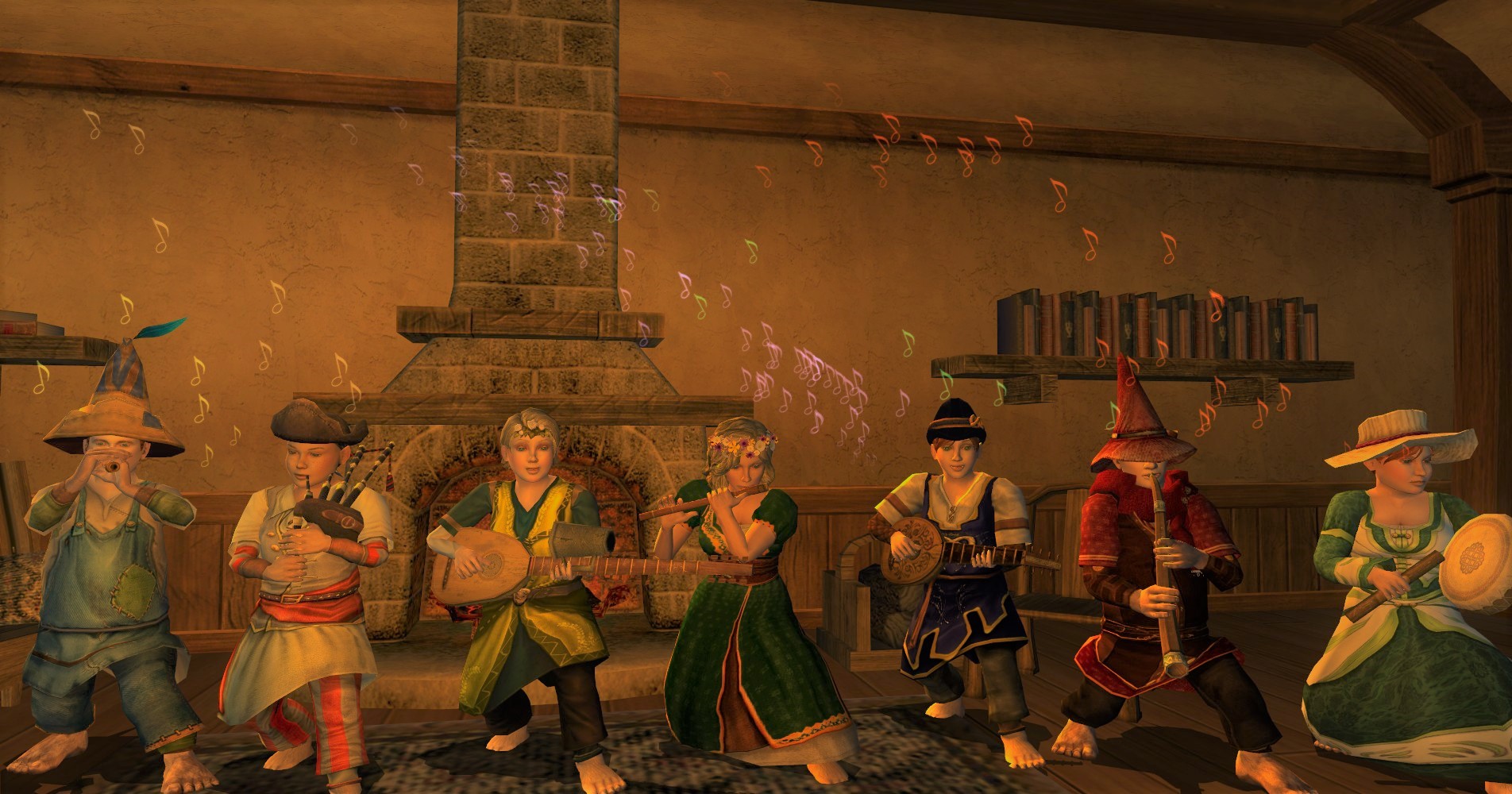 Have you ever wanted to escape from the real world for a while?

One simply does not resist this joke about doors

Open a door into another dimension where you can shake off all your worries and be with people who put your mind at ease? I have found one of those doors, and it leads to Middle-earth.

In my personal blog post, I told how I became a LOTRO roleplayer and found my friends. Now I want to tell about the lovely community I have found. There is something very special about the people I have met in Middle-earth and how they have shaped me as a person. Let me introduce you to the hobbits I mostly hang around with – our kinship, the Grand Order of the Lost Mathom.

Grand Order of the Lost Mathom is one of the oldest hobbit roleplaying kinships on the Laurelin server, and it is actively involved in many roleplaying events in the Shire. This month, our kinship celebrated its 13th anniversary. You might meet the Order members at the weekly Green Dragon Fridays, the biweekly hobbit market, and various other hobbity events. Their common interest is mathoms, but every kin member has their own special traits and habits. Some do their best in misdelivering mail, while others command a crew of pirate critters, or set bagpipes on fire whenever they get a chance. All in all, it’s a merry bunch of hobbits who don’t seem to take life too seriously. 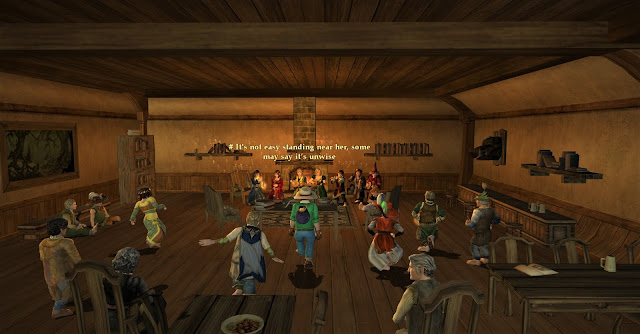 What makes the Order unique is that we mainly stay in character when we log in to LOTRO, also in our kinship channel. For some, this approach might sound like “heavy roleplaying” that wouldn’t allow us to form real friendships to each other. But that’s not how it is. When I log in, I can immediately forget all my real-life stuff and just be a hobbit among my friends. Of course, people can reflect their real-life experiences while being in character too. If you have had a busy day at work, you might state something similar in-game as well. We try to keep things loyal to Tolkien’s lore and world, so that everyone would have a good and immersive environment to play their hobbit characters. There are sometimes exceptions to this (like when we go adventuring or herd chickens to foreign lands), but these actions are done by mutual consent. It’s an MMO after all, and you can’t avoid lore violations completely when interacting with the environment and other players around you.

One notable difference to the way we talk in our in-game channels is that we avoid emoticons in our messages and use the written form of expressions instead. For example, someone could say in the kinship channel: “Hullo Miss Pycella! *smiles*”, and not using “:)” or something similar. This might sound a bit onerous at first, but when you get used to it, you will find that it helps to maintain the immersion and be more expressive than emoticons. These things might make our kinship sound like a bunch of straitlaced enthusiasts who don’t tolerate deviations from our rules, but I don’t see it like that. We are friendly towards newcomers and do our best to provide a relaxed roleplaying environment where they don’t have to be afraid of making mistakes. We do our best in being an inclusive community and good home for recruits regardless of their roleplaying experience. Whenever someone logs in, we greet them and ask about their day, and when someone logs out, they wave goodbye to all. This way, you can play your character in the kinship channel too, if you don’t have time to visit the proper roleplaying events regularly.

Of course, conflicts do happen sometimes. People have different ways of playing, different views on the lore, what’s acceptable in roleplaying, and so on. When strong opinions come together, it sometimes leads to a conflict, and this is only natural. Then again, we also give room for some minor in-character conflicts which make the roleplaying livelier. For example, it’s quite fine to be a grumpy gaffer who complains about the loud noise from the village. By enabling this, hilarious events might take place. Sometimes a player might misinterpret these roleplaying conflicts and see them in a negative light. It’s always polite to check if the others are fine with your interactions – roleplaying is not a one-hobbit show after all. In my opinion, we have provided a mature and safe environment for dialogue among our members where we can discuss things in mutual respect. 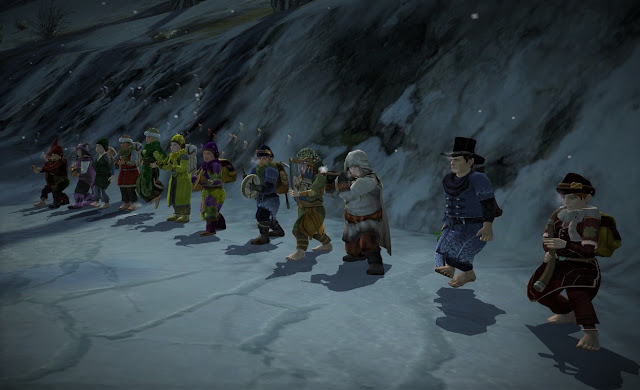 My close friends I know nothing about

As we stay in character for most of the time, you don’t really get much information about the real person behind the hobbit they are playing. Some members share information about themselves elsewhere, but that is completely voluntary. You can keep everything about your real person (location, gender, real name, nationality etc.) secret and still be a beloved member of the community. Staying in character makes the gameplay more immersive too. We don’t use voice for any activities, we just type our messages as text. Basically, we know very little about the real people behind the characters, depending on what they decide to share themselves. I am one of the members who have shared pretty much about themselves, but I don’t expect others to do the same. They don’t need to do that. By displaying unconditional kindness, empathy, helpfulness and cheering attitude towards me, they have won my heart and become close friends. Even the players who speak little and seldom can cheer me up immensely with their comments. It’s always a joy when a member returns to the community after a hiatus. Yet the anonymity has its downside too: if something happens to a member in real life, it’s very hard for us to find out what happened to them. We can’t communicate with their real-life friends and relatives and express our condolences, telling them how beloved the person was for us.

I also sometimes feel a bit awkward when I tell non-players about my roleplaying community. They see it merely as a hobby, and maybe even as something naive, looking at their reactions. It’s hard for them to grasp why I am spending so much time on a hobby like this and hang around with people who I don’t even know and have never met in person. It’s such a unique experience that it’s hard to convey it to others who never have been part of a similar gaming community. It’s sad that they won’t ever be able to see the other side of me. And that goes for my in-game friends too – their real-life family and friends might never discover the important role they play in LOTRO. It would be great if this dimension of gaming would be discussed more in the media, and not only the negative effect. Who knows how many people would feel lonely without their gaming friends? The world of gaming can provide wonderful opportunities in the times of pandemic and social distancing.

Even when we are in character, we are interacting and expressing ourselves, and experiencing real feelings. Where can you draw the line between the “real life” and the world of a game? I feel that my LOTRO is part of my real life, mainly thanks to our kinship. I believe their story will continue for many years. Their secret? The kinship has been built on friendship, right from the start. 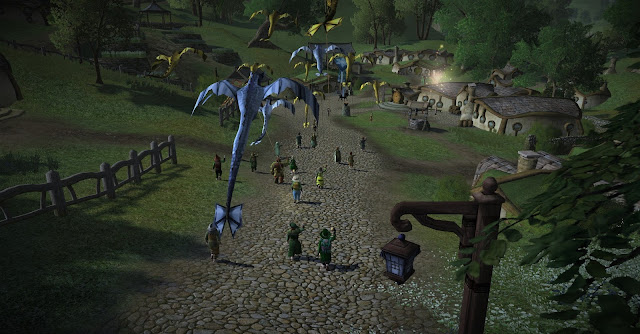 The road goes ever on and on

PS. For more information about our Shire community and events on the Laurelin server, keep an eye on our kinship site and the Bramblebury Gazette. We look forward to seeing you!

Date: Every Friday Time: 7:30PM UK time (usually 2:30PM servertime) Location: Green Dragon Inn, Bywater, Laurelin server Weekly hobbit gathering at the Green Dragon inn in Bywater, running ever since May 18 2008. This is an event for and by hobbits, although a few visiting traveling dwarves are always welcome. It is also a 100%...
May
8
Sat
6:00 PM Forest of OAKS @ Oldfurlong
Forest of OAKS @ Oldfurlong
May 8 @ 6:00 PM – 11:00 PM
The annual wrap-up of the OAKS season, where all bands that performed the last year return for a day of music! Date: Saturday May 8 Time: TBC Location: Oldfurlong, Town SquareShare this:TwitterFacebookRedditEmail
7:30 PM Adventure Saturday @ Songburrow
Adventure Saturday @ Songburrow
May 8 @ 7:30 PM – 9:00 PM

Date: Every Friday Time: 7:30PM UK time (usually 2:30PM servertime) Location: Green Dragon Inn, Bywater, Laurelin server Weekly hobbit gathering at the Green Dragon inn in Bywater, running ever since May 18 2008. This is an event for and by hobbits, although a few visiting traveling dwarves are always welcome. It is also a 100%...
View Calendar