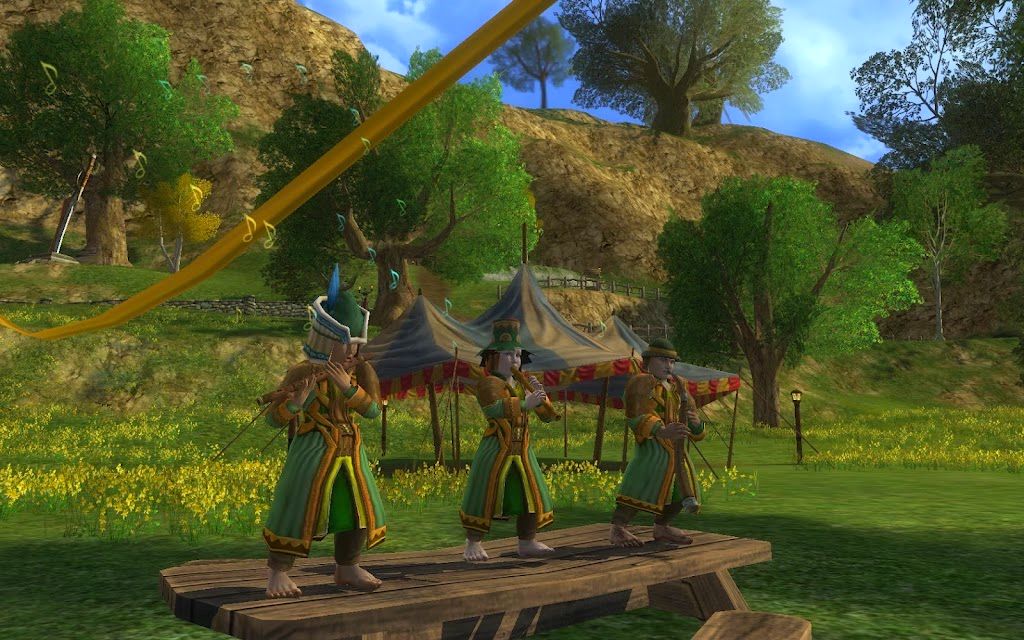 It is anniversary time in LOTRO. What better time to look back and reminisce a bit about past times?

In the early days on Laurelin, earlier even that I were around (at least in this shape), there was a bustling hobbit roleplaying community in the Shire. Happy to leave the strange menfolk in Bree alone, these hobbits basically shaped Shire roleplaying in a way that is felt even today.

I’ll try write up some notes about Shire hobbit roleplaying on Laurelin in a follow-up post. Here, though, I thought I’d show yer a couple of videos from the early days. They give yer a glimpse of the early hobbit community. It might not seem too different from the one we have today?

These videos were all made by the player behind Lotti (Lothilia), the main driving force behind Green Dragon Friday when it started in 2008. The videos are not at a very high resolution, but I suppose that gives them a proper documentary feel!

This first video is from the wedding of Lotti and Rurydoc, one of the main hobbit events in the autumn of 2008. Among other things, this wedding saw the first-ever performance of The Songburrow Strollers. The original line-up was Rowana, Simbo and Dyl.

The hobbit arriving too late for the wedding in the video is Jimothy, which I suppose yer could call “Jurassic Matzo”. He’s one of the original grumpy old gaffers in the Shire, with a glance that could make young rascals wither and shake. He was also Lotti’s in-game father, who weren’t too fond of Rurydoc for marrying his daughter.

Lotti was originally in The Shirelings, one of the early hobbit kinships on Laurelin. Eventually, The Shirelings merged with The Grand Order.

This is a promotional video for The Shirelings, which also includes some early-day footage from Green Dragon Friday.

In the autumn of 2008, The Grand Order hosted a fireworks and storytelling event in Songburrow. Lotti made this video after the event.

Lotti also made a hobbit’s “short” guide to Bree.

Parties and weddings are grand fun, but hobbit roleplayers often get the urge to run into damp, dark dungeons to smash things up. We do that even to this day. Here’s a slightly blurry video from one such event back in 2008.

Lotti also did a fair bit of Rohirric roleplay, way before Rohan was released on the LOTRO servers. Here is a video from a Codemasters-supported RP event. Grand soundtrack!

Lotti has a few other LOTRO-themed videos too on her YouTube channel. Go take a look!

Feel free to add nostalgic questions and comments below!