Playing and making music in LOTRO: A short guide 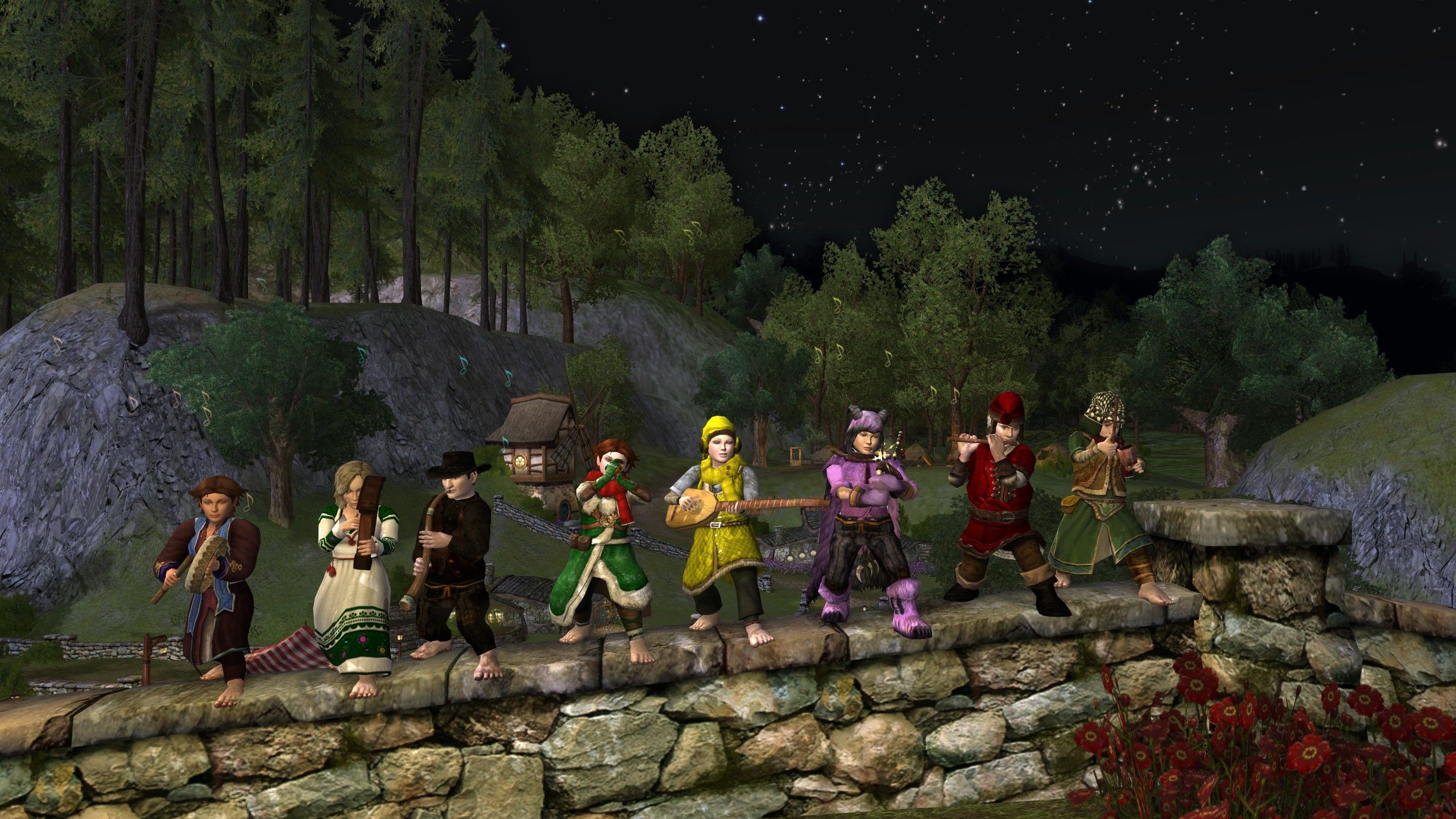 LOTRO’s in-game music system is popular with many players. Unlike most MMO’s, in LOTRO you are able to play songs that others can listen to in the game world. You can play alone or in a band. There is a large player community grown up around creating song files and performing them for others, during inn nights, concerts or multi-day festivals.

This is a short guide with tips and tricks for those who would like to give this a try. It is not a very detailed guide, but rather a broad overview of the major things you need to do, with links to useful tools and sources. The first four steps give you the basics of getting set up to play music, while the latter three are more for those who wish to go further and create their own songs.

Do you have questions about details or need some more specific help? Perhaps you have other tips or suggestions for the guide? Just let us know in the comments below!

1 Learn music skills and get instruments

From the start, all LOTRO characters know to play the fiddle and the bassoon, plus two other skills depending on which class they play. Minstrels know several more skills from the start and is a good class to consider if you primarily want to play music.

Every class can learn all the skills available, but they need to be taught new ones by minstrels. Note that some skills have level requirements, so you cannot learn/play the instrument until you reach the given level. This LOTRO Wiki table gives a good overview of music skills and level requirements.

You also need instruments. There are currently 22 different instruments in-game. Most of these can be bought from the in-game bards, like Gammer Took in Michel Delving:

However, some fiddles and bassoons are only available as prizes during festivals, or from the in-game store by using LOTRO points.

Lastly, the moor cowbell can be bought from the curiosities vendors at skirmish camps.

2 Get music files in the ABC format

Most player music in LOTRO is done by “playback” of existing song files. Unless you want to “freeplay” your instruments or just strum a few chords, you need to get your hand on some of these files. These files must be in the ABC format.

You can make the ABC files yourself (see step 5 below), get a song pack from good friends or a band, or download them from various ABC sites on the internet.

After you have some files, and assuming you use a PC with Windows installed:

Technically, you can now start playing the songs in-game by using some pretty long commands. I strongly recommend you install a plugin to help play the songs, though. See step 3 and 4 below.

SongbookBB is a plugin which makes playing music in-game much easier, since there is no need to type out long commands anymore. It is also indispensable if you want to play music in a band synced with other players.

There was an original Songbook plugin from way back, made by Chiran. Nimelia made a “tweaked” version of the plugin called “Songbook: The Badgers Chapter” (or SongbookBB for short), with lots of new functionality added. Recently, Zedrock made a beta version based on this again, with some tweaks. The plugin is also being further developed.

You can get the latest version of SongbookBB here.

You’ll also find install and use instructions there. The short version of installing the plugin is:

To be able to use the plugin properly, you also need to use a data filler, see step 4 below.

4 Use a data filler

To allow SongbookBB to access your installed ABC music files, you need to run a “data filler” program. The data filler scans your songs and reads the data stored in them. This lets SongbookBB know which songs you have. You need to run this data filler every time you add new songs to your music folder.

I recommend that you use Nimelia’s Songbooker data filler, which you can get from the SongbookBB page. It is fast and opens up for some functionality which other fillers don’t give. Just install it anywhere on your computer and run it (and re-run when you have installed new songs).

Pro tip: The Brandy Badgers (the music collective in my kinship) also use Nimelia’s Songbrowser, a stand-alone program (also linked in the SongbookBB page) which helps you tag your ABC file with more information. The tags allows SongbookBB to filter results, display “recommended” song parts based on the number of musicians around, etc. You need Nimelia’s Songbooker to read the added tags, though.

The four steps above should be enough to get you going with instruments, skills, song files and a plugin which makes music playback much easier. However, you might soon find that you want to make your own songs, to get the sound that you really want. The following steps will show you how go get started with that.

5 Use Maestro or another ABC converter

Unless you want to write your own ABC files from scratch, the easiest way to make them is to convert midi files. There are tons of midi files available on the internet, so just start searching for the ones you want.

Once you have the midi files, you need to convert them with a midi to ABC converter. For most players, Maestro is the easiest solution available. The converter gives solid results and has a nice graphical interface. so it is pretty easy to use. It is also bundled with the LOTRO ABC player, which you can use to preview ABC songs outside of LOTRO, to get a feel for how they will sound in-game.

The most recent version of Maestro is available here.

There is another converter too, BruTE (Bruzo’s Transcoding Environment), which in some cases give better results, but which is less intuitive to use. You can get BruTe here.

6 Use a midi editor or Digital Audio Workstation (DAW)

If you want the best results from your conversions, you sometimes have to edit your midi file before putting it into the converter. Some reasons why you’d want to do this are:

Cakewalk by Bandlab – a free and very powerful DAW. This was formerly a commercial product, Sonar, but it is now free and has seen a lot of improvements the last couple of years. You can do a lot of digital music-related work in Cakewalk, not just editing midis, so the number of options may be a bit bewildering at first glance.

There are many other options too, especially if you are prepared to pay. I have used Reaper a lot myself. It is not the most intuitive suite these days, but very powerful. It is hard to fully recommend it now, though, after Cakewalk went free.

7 Consider some nice to haves

While not critical for playing or making music, there are several tools which are “nice” for musicians to have. Here are some I use:

If you want to “sing” song lyrics along with your music in-game, I heartily recommend Simbo’s Poetical plugin. It can store a lot of songs or poems and allows you to recite these in-game by simple clicks on a button. Poetical is available on LOTRO Interface (the main LOTRO plugin site) or from here.

Finally, music events in LOTRO can get very busy, with lots of /dance /clap /cheer emotes which makes your chat box scroll fast. Sometimes, there are also very chatty NPC’s nearby that disrupt things further. To help filter away unnecessary messages from your chat box, consider using Simbo’s Babble plugin. It takes a little setting up, but it is a life-saver once it is configured properly. You can get Babble at LOTRO Interface (the main LOTRO plugin site) or from here.

Thanks for reading this far!

Do you have questions or need more specific help? Do you have other good tips and tricks which could be useful for the guide? Is there something completely wrong here? Just let us know in the comments below! 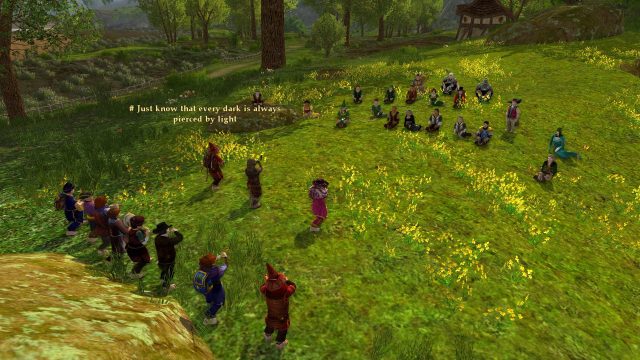 Date: Every Friday Time: 7:30PM UK time (usually 2:30PM servertime) Location: Green Dragon Inn, Bywater, Laurelin server Weekly hobbit gathering at the Green Dragon inn in Bywater, running ever since May 18 2008. This is an event for and by hobbits, although a few visiting traveling dwarves are always welcome. It is also a 100%...
May
30
Sat
7:30 PM Adventure Saturday @ Songburrow
Adventure Saturday @ Songburrow
May 30 @ 7:30 PM – 9:00 PM